From the Ground Up: How to Identify Foundation Issues and What to Do About Them 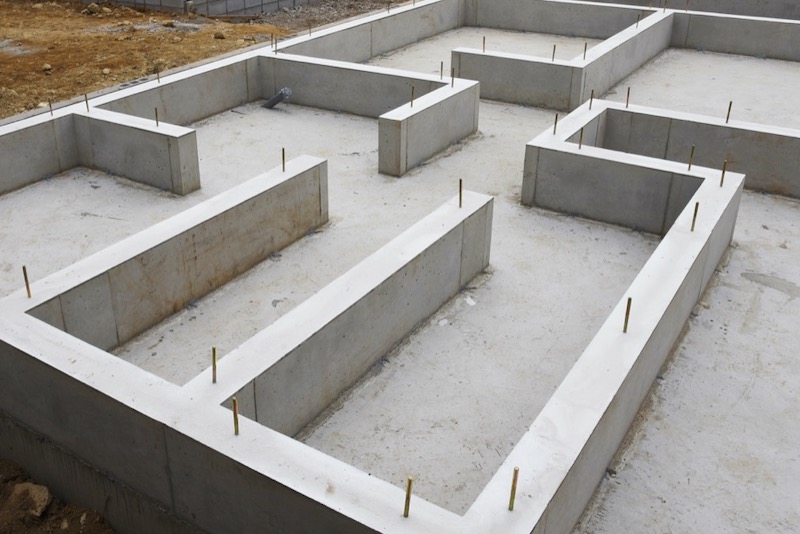 In addition to being expensive to repair, foundation trouble can also be dangerous. Problems with the foundation can put a stop to any home improvements until all issues are addressed. Because foundation issues are so problematic, they can also significantly impact your home's value, sometimes even after the problem has been resolved.

No homeowner welcomes the thought of foundation problems, but knowing how to identify them and how to find a contractor to perform repairs is a good place to start. Early identification of the problem can help get the issue resolved before major (and more expensive) repairs are needed.

For example, homes that are built on "expansive clay" can be easily damaged because of the nature of the soil. Expansive clay shrinks and grows as it is exposed to moisture. Soil that does not drain properly can easily create conditions ripe for foundation damage, while homes that are built on soil that has not been properly prepared for construction can also experience foundation trouble. Earthquakes can easily cause foundation trouble by shifting the blocks that the home is sitting on. Plumbing leaks and errant tree roots can also cause foundation problems.

Homes settle naturally over years. Normally, problems occur when the settling of the home happens unevenly.

Most of the time, foundation problems are easy to spot if someone knows what they're looking for. Inspecting a home periodically for signs of foundation trouble can help homeowners identify problems, especially if they know their home is at risk.

If a homeowner thinks their home has foundation problems, it is recommended they get their house inspected by a structural engineer to determine whether the home's foundation is in danger and suggest the proper repairs.

When evaluating cracks in the foundation as well as cracks elsewhere in the walls, it's important to evaluate the severity, location, and shape. "Stair step" cracks, for example, are often an indication of a serious problem, while hairline vertical cracks are generally the most harmless. Cracks greater than one quarter of an inch thick can be a problem.

Cracks may appear in places other than the foundation of the house, including the walls, especially above the doors of the home. Homeowners should look for cracks coming out of the corners of the doors and windows. These cracks and gaps can lead to other unusual problems such as windows and doors that won't open or close properly, or counters and cabinets that separate from the wall. 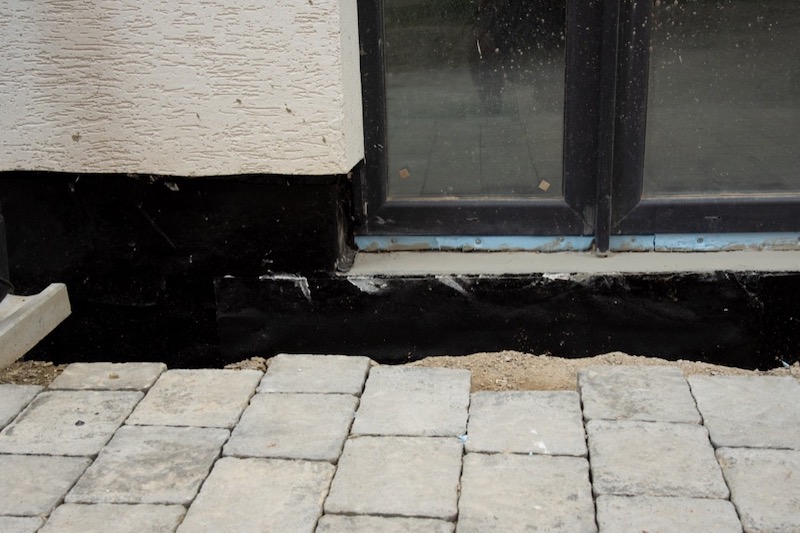 When properly attached to the house, molding should fit firm and snug against the walls, floors, or ceiling. However, when the house starts to settle, molding can start to break away from the rest of the house. Portions of molding may be no longer attached, or it may appear to be attached but no longer makes a straight line.

Molding movement can also occur when a leak is happening behind the walls. If a homeowner has noticed a problem with their molding, they should watch for other signs of a leak such as bubbling paint in the area around the molding or water stains on the molding and mildew. If a homeowner is noticing more signs of a leak, they should contact a plumber or roofer to inspect their house and diagnose the problem.

Doors Not Opening or Shutting Properly

The doors in a home should open and shut properly, and they should continue to do so over time. Doors that become difficult or impossible to open and close properly could be doing so because their frames have changed due to the shifting of the home's foundation.

Of course, other problems could be causing doors to be unable to open or close properly. For example, humidity can cause door frames to swell and shrink. Some doors may experience this problem seasonally, only to go back to normal operation when the season ends. However, if many doors are having the same problem all at once, or if the windows are also having a problem opening and closing, this could be a sign of a more dramatic change taking place in the home.

Foundation upheaval is a dramatic movement of the foundation, far greater than settling. Upheaval often occurs after floods, deep freezes, and after shifting of the soil, similar to what happens during earthquakes. Signs of upheaval include:

Sometimes, foundation upheaval is difficult to distinguish from settling. If a homeowner believes that their foundation may be displaying signs of upheaval, they should talk to a qualified contractor to have their problem correctly diagnosed.

Because shifts in the foundation can cause flooring to move, bulge, crack, or shift, the first sign that some homeowners notice is a problem with the flooring. When some homeowners describe their concern, they simply say that their floor looks "off." This can happen because the floor is tilting in one direction or in opposite directions.

Often, these problems are hidden by flooring materials like carpeting, tile, and area rugs. Large cracks down the center of the floor may not be noticed until the flooring material is removed or until the problem becomes so problematic that the tile begins to separate from the wall.

Other signs that the floor itself is experiencing a problem include:

Foundations usually serve as a barrier between the soil outside the house and the soil in the crawl space. This keeps out moisture from the environment, including snow melt, rain, and floods. A damp crawl space can be an indication of cracks that are allowing moisture to enter the crawl space, which is a sign of a damaged foundation.

Sometimes, moisture is the cause of foundation damage, as soil upheaval often occurs because of freeze/thaw cycles, flooding, and pipe leaks. Finally, sometimes broken pipes can occur if the foundation problems have caused movement that result in damage to the pipes. While a damp crawl space can happen for many reasons, and may not necessarily be a sign of foundation trouble, it's still a possibility.

A leaning chimney can occur either because of shallow footings, poor quality footings, poor water management, or inferior soil under the chimney. No matter what, a leaning chimney is a serious problem that frequently points to foundation issues. A chimney that leans can fall onto the roof, fall away from the home, drop bricks onto a person, fall onto the homeowner's property, or onto a property nearby. There are few circumstances under which a leaning chimney is not caused by foundation trouble, so it should be addressed immediately. 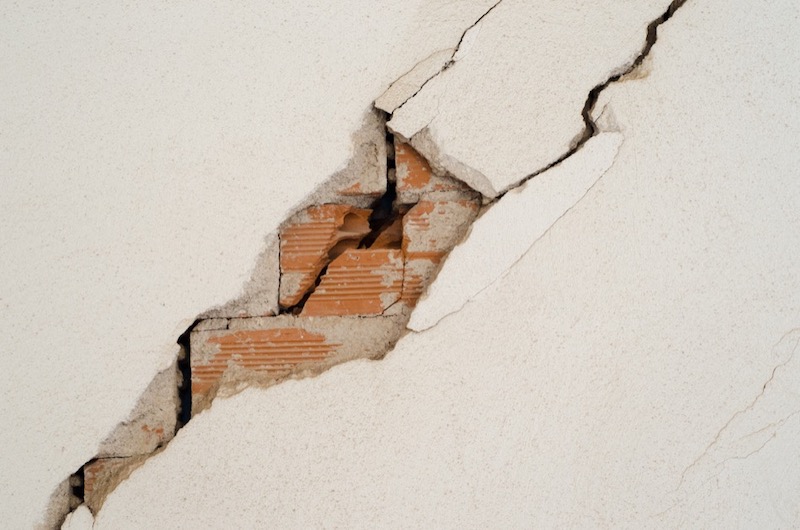 When examining cracks, take note of the size, direction of the crack, and whether the crack is growing. All of these factors can tell homeowners more about what might be going on with their foundation.

Stair step cracks are one of the quintessential signs of a foundation problem. Especially if the wall is bulging, this could be a sign that the home's foundation is dramatically shifting. Zigzag cracks generally occur in the mortar between bricks and should be inspected as soon as possible, especially if the crack is more than 1/4 of an inch in width.

Hairline cracks are usually nothing to worry about, unless they're causing moisture in a basement or a leak into a crawl space. Hairline cracks should be watched, however, if they're growing or seem to be contributing to a moisture problem.

Hairline cracks can be inspected by a general contractor rather than a structural engineer. If the cracks are growing or causing problems with moisture management, they can be sealed by a professional.

Vertical cracks are usually not much to be concerned about, as they occur because of shrinkage. However, if a foundation does have vertical cracks, it could be a sign of improper moisture management, similar to hairline cracks.

Working with a Professional

While this period of assessment can be expensive, it is the only way to determine what needs to be done in order to repair the home. A standard home inspector, though capable of noticing the red flags of foundation trouble, is usually not qualified to make a foundation assessment. Once the initial assessment has been performed and foundation trouble has been identified, the homeowner must then hire a contractor who specializes in foundation repair.

If a home has foundation problems, then it's vitally important for homeowners to get the problem addressed by professionals. The type of foundation the home is built upon and the reason for the foundation trouble plays a big role in what needs to be done next. There is no one-size-fits-all solution to foundation trouble, and those who are inexperienced lack the tools and knowledge to move forward with a repair. Only a professional contractor and a qualified structural engineer should handle the issue.

Once the work is done, the homeowner should get a certificate and a warranty of finished work, in case they decide to sell the home in the future.

Foundation repair costs vary, depending on what's wrong and what needs to be done to make the repair. Assessment from a structural engineer may cost anywhere from $300 to $1,500. The cost for this assessment ranges because the initial inspection may not be enough. Soil testing and testing of the structure may continue beyond the initial meeting.

Beyond that, the cost to repair a foundation ranges from about $3,000 to about $7,000 on average. The most expensive foundation repairs can push costs into the range of $15,000 or more.

If piers have to be installed, the homeowner pays per pier. Cracks need to be repaired, and costs vary per crack. Bowed walls are among the most expensive type of repairs and incur the greatest costs, while leaks also need to be addressed to repair damage and stop the leak from reoccurring.

Homeowners should receive estimates before their foundation repair begins and should also sign a contract to avoid any unexpected charges.

The methods that are used to repair foundations depend on the problem. Common methods include:

Foundation repair requires special tools and often special types of materials, like an expandable and flexible crack sealer to flex with the foundation. Homeowners and most general contractors do not have access or the knowledge of using these special tools, which is why it's so important for homeowners to hire a qualified and experienced foundation professional.

Selling or Buying a Home with Foundation Issues

Buying and selling a home with foundation problems can be complicated, which is why it is important for buyers and sellers to work with a real estate professional. Homes with unresolved foundation trouble may take longer to sell, but pricing the house accordingly can help. All known foundation problems must be disclosed on the home selling paperwork.

If you're a buyer trying to purchase a home with foundation trouble, review all paperwork available about the problem, and get the home assessed by a structural engineer to avoid taking on a house with more trouble than you can afford. If the home was recently repaired, get certification and find out about the contractor's warranty.

Sellers should expect their home's foundation problems to impact the price of their house significantly. If the seller has the means to make the repairs before placing the home on the market, then they may make back the money when the home finally sells. Even if the repairs have been made, the seller may still have to disclose the issues in the listing and paperwork, depending on the laws in the area. 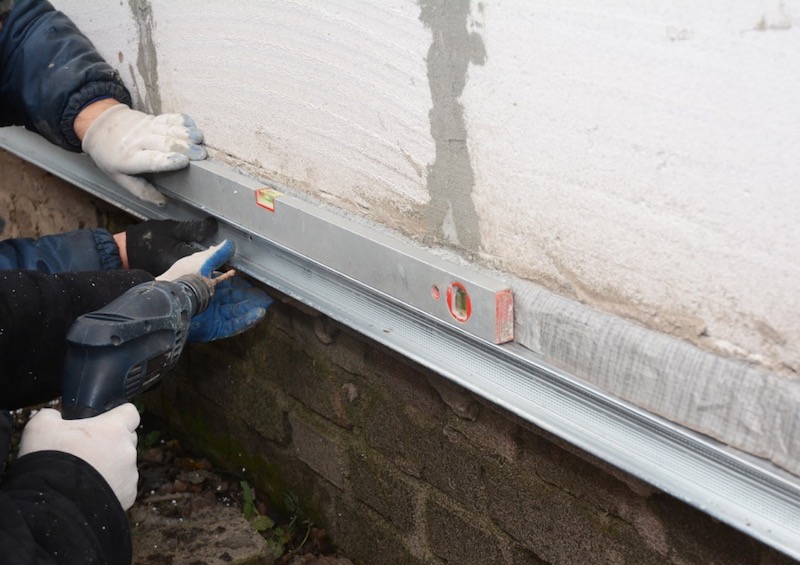 Foundation trouble can be a debilitating problem if it's not properly and immediately addressed. A faulty foundation can diminish a home's value and stand in the way of necessary home repairs and upgrades. Faulty foundations can even be dangerous. In almost all cases, foundation problems should not be fixed by a homeowner or an inexperienced contractor.